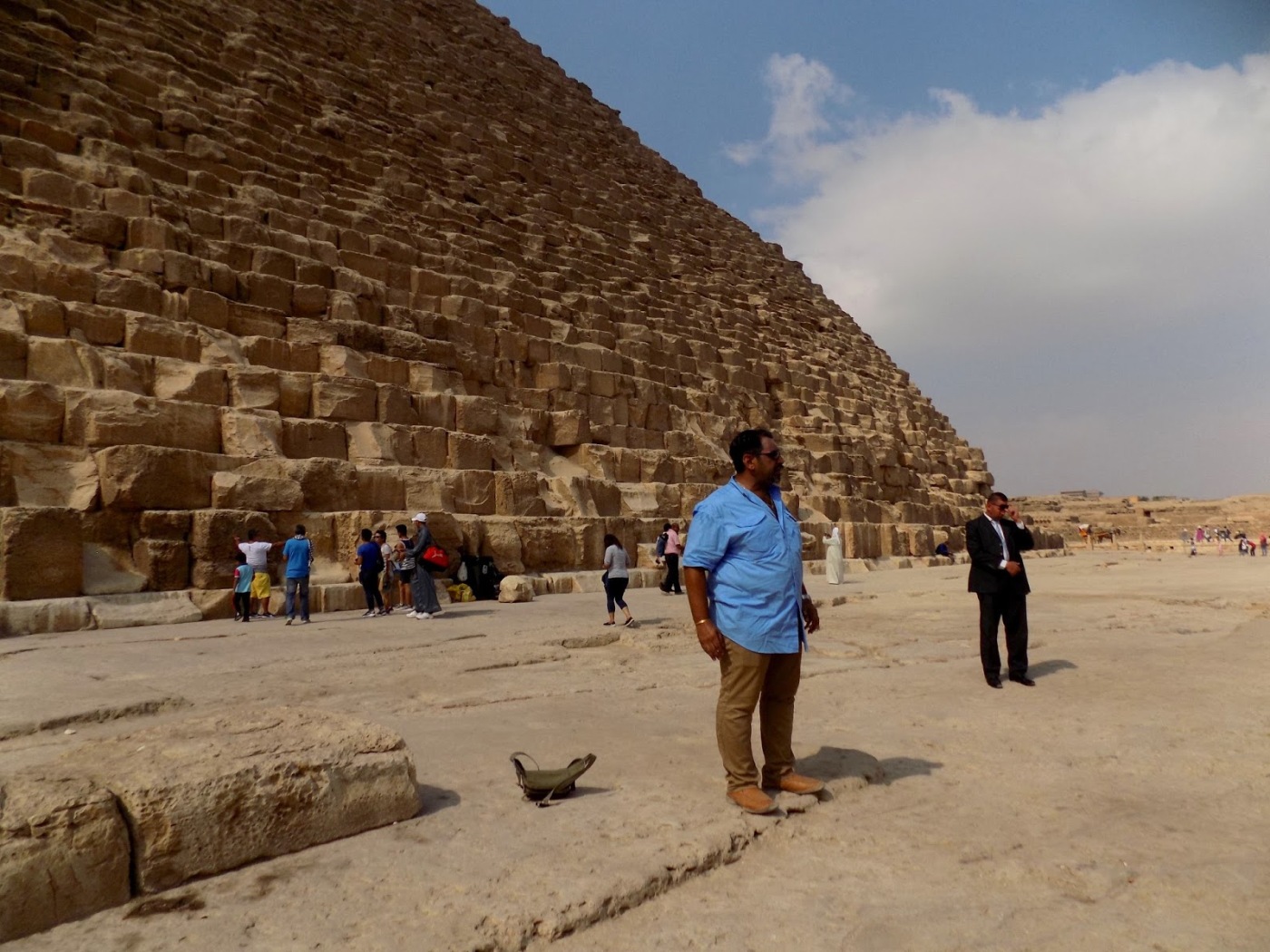 When people imagine visiting Egypt, many probably envision seeing the same things: the Great Pyramids and Sphinx, mummies, and treasures from tombs. While the other towns of Egypt (such as the Luxor/ West Bank area) have incredible things to offer, many travelers fantasies (and bucket list items) can be fulfilled in one day, in one town. Don’t think that I’m saying that Cairo is the only place to visit in Egypt–I’m saying it’s an essential place to visit in Egypt, regardless of the length of your tour.  We spent 8 days of touring in Egypt, starting and ending in Cairo. Here’s how we spent our first day on tour.

Our first official day of touring began with a 6:30am wakeup call. At the time this seemed early, but we’d soon discover otherwise; “beat-the-heat” became the groups motto for getting up earlier and earlier. Breakfast at our hotel, Le Méridien Pyramids, was an impressive international spread. After breakfast, we met our tour guide  from Encounters Travel, Sherif. I highly recommend traveling to Egypt with Encounters. Sherif was incredibly knowledgable and willing to do anything to enhance our experience. After ‘orientation’, we left for the pyramids, which was a short drive. At the entrance to the site, there are at least five stations to walk through/ scan your bag: only one was open due to the ridiculously low tourism rate. Once we were inside the gates, Sherif gave us a brief history lesson about the building of the great pyramids and the origin of pyramids and we had free time to take photos. After photos, the majority of the group embarked on a camel ride. We met the rest of the group at Menkaure’s Pyramid, which we then had the opportunity to go inside. The ramp into the pyramid is wooden and steep; the ceiling is fairly low, but became lower as we walked. I’m 5′ 3″ and my height was a benefit–I was able to stand for the first section, but did end up crouching towards the end. The tunnel opened into a large room, which led down to a smaller room. Cameras are not permitted inside the pyramid. When we exited the tomb, we drove over to the panoramic view, where all three pyramids can be seen. This was the best place to take the holding and pinching the pyramid pictures. After photos, Sherif summoned us to the bus with her very distinct call.

At the Sphinx, we took photos, visited the mummification temple, and took more photos. When it comes to taking the tacky, posed Sphinx photos (kissing, wearing sunglasses, etc.), the best option is to allow a local to help you. They know exactly where and how to pose you–and will often give you more ideas than you thought of. In exchange, they’ll ask for money…and they are more than happy to accept a few American dollars. En route to the Egyptian Museum, we ate some sandwiches from a local shop. Two falafel and one chicken shawarma sandwich came out to about $2.50 (US).

Afternoon:
As soon as we pulled up to the Egyptian Museum, I was chomping at the bit to start looking around. My dad and I broke off from the group–I knew what I wanted to see.

The Museum is difficult to navigate, as there are no directional signs or brochure style maps. I took a picture of the map at the entrance, which helped us greatly. Having a (limited) background on Egyptian history definitely assisted in our Museum experience. I’m fairly certain that not much has changed since the opening in the early 1900’s (though a new museum is scheduled to open in 2018).

Highlights included King Tut’s mask and chariot, the mummies of his parents, and Ramses II. The museum was very hot so we gave extra time to check out the gift shop, hoping maybe that area was air conditioned. It was cooler, but fairly nonexistent. There were a handful of reproduction artifacts and books (with a layer of dust), but that was it. After the Museum, the group went to a papyrus making tutorial and shop. The group then had some downtime before we headed off to the overnight sleeper train to Aswan. If we hadn’t been catching the train, more could have definitely been fit into this day. A tour of Coptic Cairo, Khan El Khalili market, or a dinner cruise could have easily been added.