Night:
At the train station, it seemed fairly obvious that we were only visitors; most people looked comfortable and exchanged dialogue in Arabic. Next to the mostly-covered women, I felt naked, but not uncomfortable. Rumors had passed through our tour group that snacks were a train necessity, so my dad and I perused the snack carts and little shops. They were not unlike something you would find at any other train station or on the street in New York. As another woman in the tour group narrated her terrible bathroom experience, I wished away my need to pee. Someone had gotten ‘sick’ all over the bathroom floor. To clean up, the bathroom attendant simply washed it away with one bucket of water. I wasn’t sure I wanted to walk into that bathroom wearing sandals. I later learned that the train bathroom was probably about the same cleanliness–the standards are just different than American bathrooms. I tried to go soon after we got into our tiny room, but was told I couldn’t use it while we were at the station. I was enlightened that this is because everything dumps right on to the tracks. In our dinner, the only thing that was slightly palatable was the salty rice. After my visit to travel medicine (to pick up typhoid pills), I was afraid of anything that wasn’t warm.

Eventually, my dad and I made our way up to the club car. I thought the smoke would be thick enough to make you choke and that the drinks would be going down like water. The smoking was controlled (for the culture) and Muslims don’t drink. A couple and solo-traveler from our tour group were sitting in the club car, so we talked with them for a bit– about how they were continuing on to Jordan, other adventures, and our trip so far. 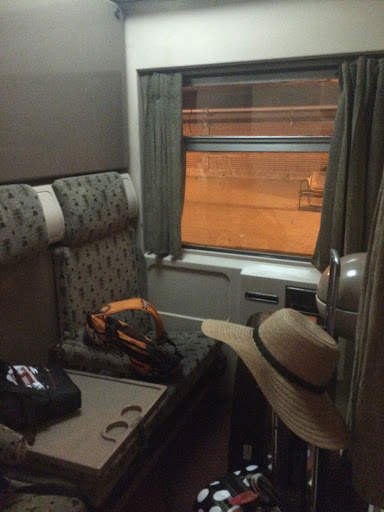 When we went back to the room, we didn’t have a choice but to get the beds turned down, meaning it was nearly impossible to sit. I sat up on the top bunk with plans to read a book, but instead wrote about my first day in Egypt. My dad sat on the bottom bunk with plans to read, but instead fell asleep. Eventually we called it a night, flicked the light off, and nestled into our rock-solid beds. Throughout the night, sharp jolts and the occasional train blasting past would wake me up. It was far from a good nights sleep and I have never felt quite so crusty. I didn’t really use the wash basin, because how do wash basins even work?

Morning:
I woke up in the morning to breakfast being served…and I would have much rather stayed asleep. My dad and I both attempted to eat the breakfast, him more so than me. At this point, I was getting tired of airplane style food and prepackaged bread. He somehow managed to stomach two packages of fruit bread. I pushed my plate away and went for the snacks we bought at the train station the night before.

As soon as I walked into the hallway, I was met with birthday greetings from everyone in the tour group. Keoni asked if I felt any different– I responded with “no, do you?” We both had the opportunity to celebrate on 20th birthdays on the trip, his being the day before mine. Crammed into the hallway, the group watched shocking passing scenes; they looked like things out of sad advertisements and my sociology textbook. Seeing that for the first time in person was certainly impactful. Sometimes the villagers would see us watching and wave excitedly.

Finally we arrived and the station flooded our noses with a smell reminiscent of fried chicken. As we left the station, people crowded around outside to welcome us to Aswan.