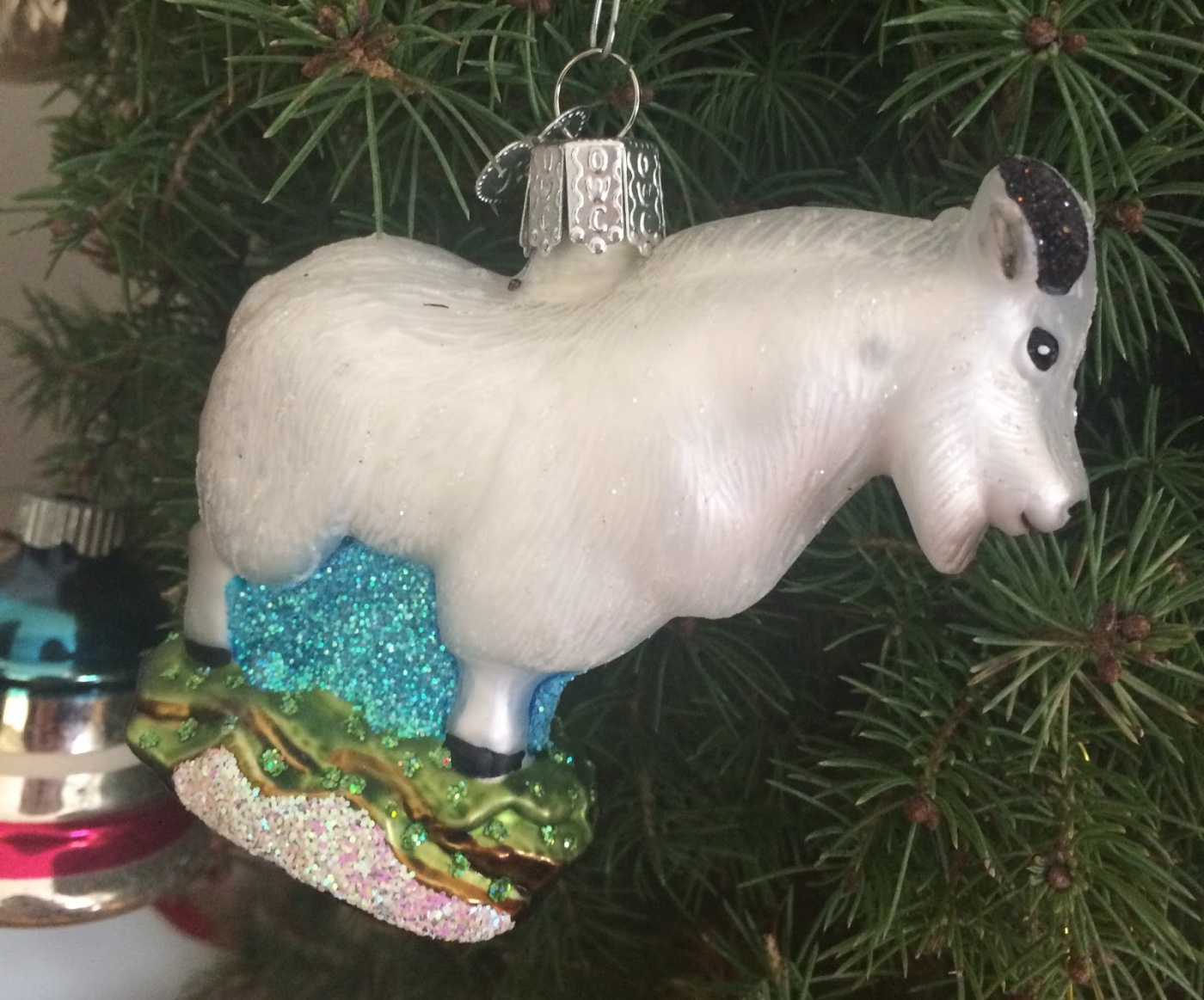 When I was little, the family Christmas tree literally fell on me while I was coloring. Since then, my parent’s divorced and the meaning behind the ornaments has grown. At my mom’s house, we tend to get an ornament to represent something we did that year. At my dad’s house, we usually try to get an ornament to remember a trip we went on that year. These are some of my favorite stories behind ornaments! Happy holidays!

On my first trip to Europe with EF tours in high school, we traveled to Germany, Austria, Switzerland, and Liechtenstein. Whenever it would get a little too quite on the bus, our tour director would play the lonely goatherd song from “The Sound of Music.” When we visited Mount Pilatus, I heard that there was a pretty good chance we would see mountain goats…but it was so foggy that you couldn’t see anything. Fast forward two years and I was at the Temple of Apollo in Delphi, Greece. During the tour, I spotted an entire herd of mountain goats. Needless to say I was so excited that I broke off from the group and took pictures of the mountain goats instead of learning about the temple! 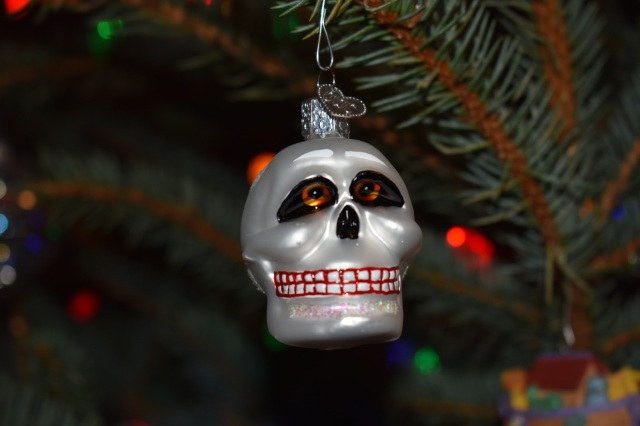 Sugar Skull
On the occasions that we were offered extra credit for bringing in food for a “fiesta” in my Spanish classes, I never took the easy way out with a bag of tortillas or some plates. One time for a Dia de los Muertos, I decided that I was going to make sugar skulls…hours later, the sugar was still liquid and my mom and I were about to rip each other’s heads off. I ended up making the skulls out of fondant. I didn’t learn my lesson…the next summer I was sawing a foam mannequin head in half for a project for AP psychology. 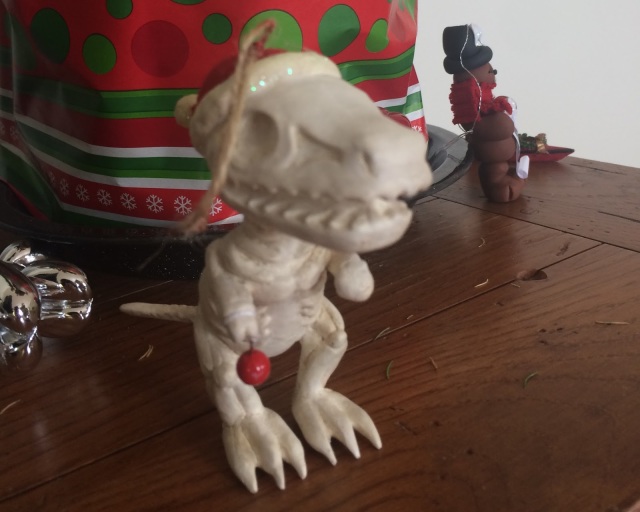 Sue
Our friend Sue didn’t make it on the mini tree this year (she’s a little too heavy), but she sat at the base. Sue, the t-rex from Chicago’s Field Museum, first came into my life in kindergarten! We received free bookmarks and one of my classmates claimed that her mom was one of the people who worked on the dig; I still don’t know if she was telling the truth. Then in 2013, I visited Chicago with my dad, stepmom, and best friend, Maggie. We were all pretty excited to see Sue in the lobby, even if Maggie got mad at me later because I was too focused on seeing the museum and wouldn’t go the Nation’s Best Bathroom with her. I don’t think we’ll get over that regret until we go back to the bathroom. 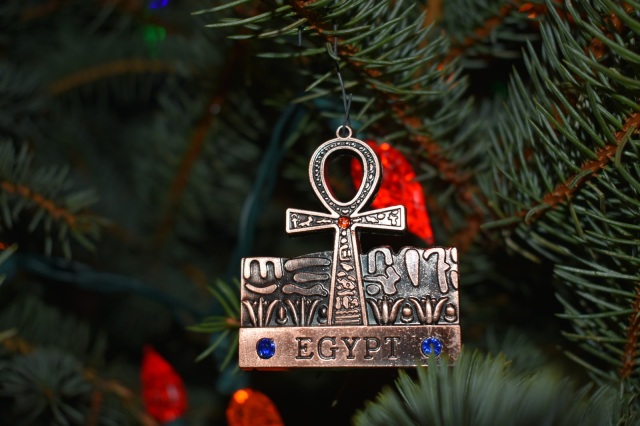 Ankh
In Egypt, finding a Christmas ornament proved significantly more difficult, as the country is primarily Muslim. As we prepared to depart from the Cairo airport on our last day, I spotted a Ankh magnet with a little hole at the top, perfect for sticking an ornament hook in. Every time I look at it, I hear Sherrif (our tour director) trying to teach us the proper pronounciation– “annnkkkk.” 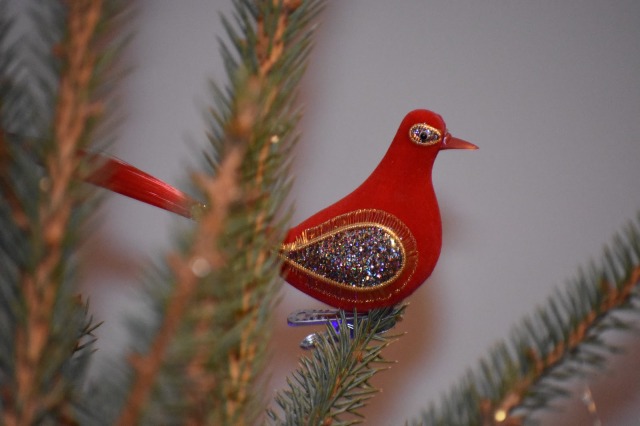 Don’s Odd Birds
My mom and I are big fans of yardsaling (simply know as salin’ in our family), but our favorite type of sale is definitely a full-house estate sale. Often times, you get to walk around the rooms of the house and everything is still where it was kept by the owners. One summer, I found a box labeled “odd ornaments like Don” tucked away in the corner of a basement. It was full of ugly Christmas ornaments, mostly white and red birds. This year they took roost at the top of our tree–since it didn’t have a distinct top, we didn’t know where we would have put a star!