Explaining my study abroad situation can be a bit difficult; I’m studying abroad in Florence at Florence University of the Arts through my home university with Global Semesters. Whew. What a mouthful! Speaking of mouthfuls, our program coordinator (Olivia) from Global Semesters took our group out for a traditional four-course Tuscan meal this week.

There are only three students with Global Semesters (me, my roommate, and another Susquehanna student.) We met Olivia in Piazza della Republica at 7:45pm for our long awaited dinner. There wasn’t a possibility that I was making it that late without eating a snack, so after class I made sure to grab an “oily bread” from the little shop around the corner from the apartment. I’ve been there two times this week, but it’s hard to say no when they cost less than 50 cents!

Back to dinner! We walked from the piazza to L’Osteria di Giovanni. On the walk over, Olivia explained that Giovanni’s brother owns one of the most popular (and now tourist crowded) resturants in Florence–but that the recipes used by the brothers are the same. When we arrived, Giovanni himself began chatting away with Olivia and introducing himself to us. We were seated off to the side and given both English and Italian menus. An extra place was set at the table.

Giovanni’s team did everything they could to make sure we had a true Italian dinner. The meal opened with a taste of prosecco, soon followed by the arrival of the mysterious Federico. Federico is a friend of Olivia’s and was invited to keep Nick company and tell us about Florence from a different perspective. 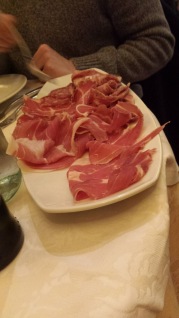 Since they wanted us to have a true taste of Tuscany, we didn’t pick out our antipasti (appetizer) plates. Instead, the table was quickly crowded with plate after plate of food (and some of Giovanni’s wine made with local Sangiovese grapes.) I took a small portion of each of the dishes, staying far away from the pate and selection of cured meats. Then I discovered that I made a mistake: never sit next to an Italian at dinner. Olivia, across the table, started saying that I would eat the rest of the fresh ricotta. Federico asked if I wanted more of the green spinach and cheese concoction, I declined and he promptly slid a full piece onto my plate, dolloped cheese on top and onto the plate with the expertise of a chef, and topped it with a tiny tomato (I’m not even sure where that came from!) Olivia and Federico were in distress when they realized they had forgotten to tell us to add olive oil to the artichoke salad.

When the servers found out that I was vegetarian, bowls of riboleta were brought to the table: although they made it clear that this was happening because of me. Riboleta is a soup made of beans a vegetables. Federico reached over and poured olive oil into my bowl–he wasn’t taking the risk that I missed out on it this time. Then, he began a brief lesson on how olive oil varies by age. A younger oil, like what was added to by riboleta, has a slightly spicy taste.

At this point in the meal, our primi piatti (first plate; pasta) hadn’t arrived yet and I was already fairly full. The further into the meal we got, the more I was thankful for the slow service that accompanies the Italian dining experience. I needed as much time as I could get to digest! Nearly everyone at the table ordered the same pasta dish: tortelli stuffed with pear and percorino cheese, in a cream of leeks with almonds. Since I arrived in Florence, I’ve been on a pear kick, so I was particularly excited to try this combination. I was saddened by the fact that I couldn’t taste the pear, but the dish was delicious nevertheless.

After stuffing myself with the three large tortelli, I was ready to retreat. I didn’t need a second plate. Rabbit, filet mignon, and a highly recommended young pork belly were ordered. I thought I was going to make it out alive.

A rapid fire of questions were asked, but my answers were ignored: I was getting a plate of cooked vegetables whether I wanted it or not. I only managed to eat a few bites. I was worried I would throw up or quite possibly never need to eat again.

Finally, it was dessert time. At this point, I felt relief: I had made it this far and there is always room for dessert. We were given a few options, including cheesecake. Our student trio decided we would get two desserts and split them when suddenly Olivia ordered lemon sorbet. Sorbet. Refreshing. Light. We changed our minds quickly: if light and refreshing was an option, we wanted that instead.

After about three hours, we stepped outside into a light, cool rain. Never have I been so full in my life.

One thought on “Tasty Tuscany: A Four Course Meal”