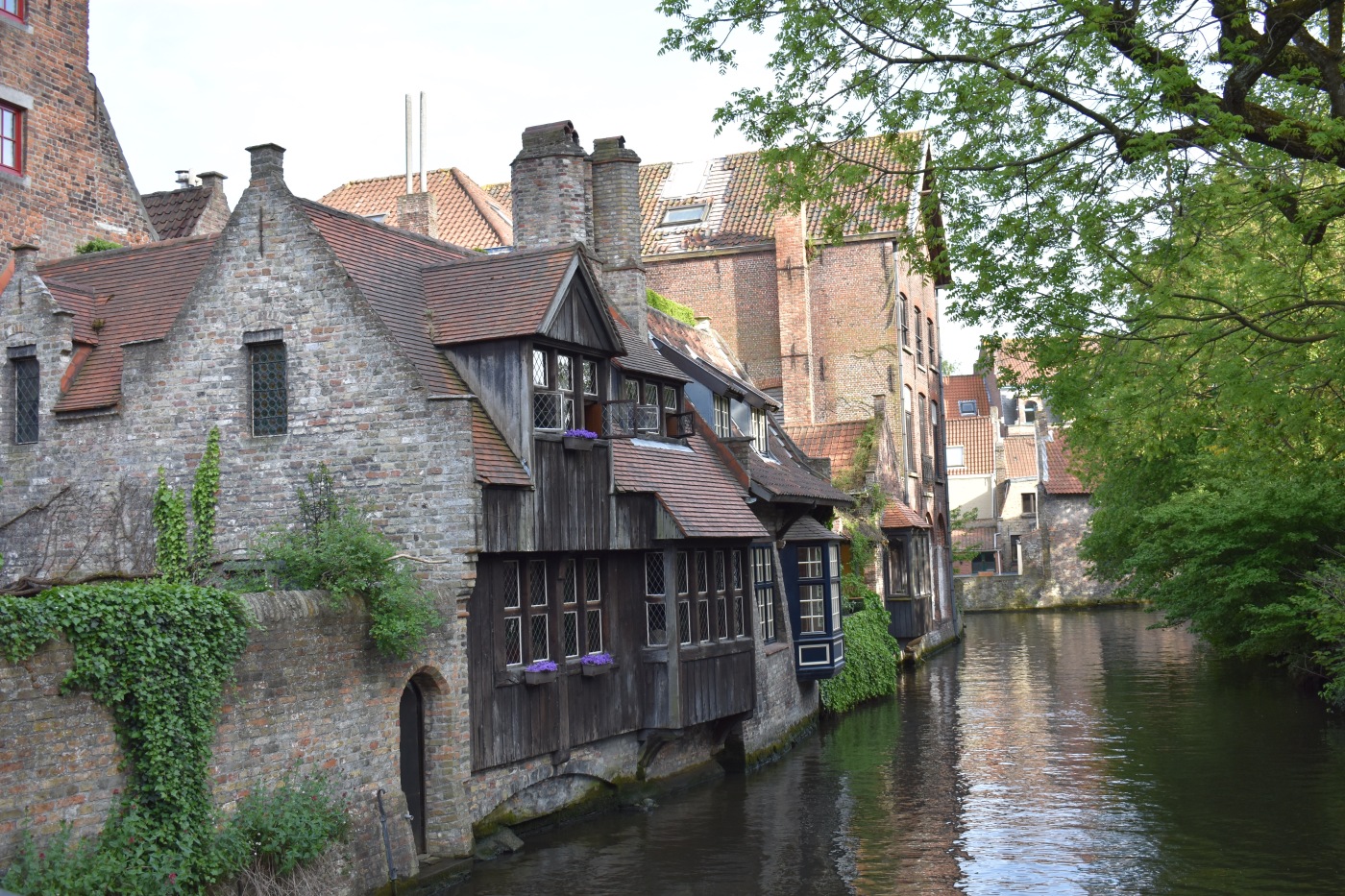 My self-imposed schedule meant one day each in three Belgium cities: Brussels, Bruges, and Ghent. A delay in Brussels meant that I didn’t arrive in Bruges until the afternoon…throwing off my seemingly perfectly timed plan.

In Bruges, I was quickly captivated by the feel of a smaller town. I was enchanted by the varied architecture and the winding canals. After a smooth check-in at the Snuffel Hostel–very clean and lots of open space in the rooms, although I was disappointed that I didn’t get to see the dog mentioned in many of the reviews–I immediately set out to see the sights, determined to be on my way to Ghent by the following morning.

Well, that didn’t happen. It’s important to note that everything closes early in Belgium…most-places-are-closed-by-early-afternoon kind of early. I caught the Frites Museum before it closed, but I had to sacrifice going to the cafe for more time to walk around the Museum. I learned more about potatoes and fries than I ever realized I didn’t know. They Museum also houses the first known illustration of a potato plant, if you’re into that kind of thing.

After leaving the Frites Museum, doing anything other than eating fresh fries out of a cone wasn’t even an option. I navigated my way to the Markt square, where I found temporary stadium seating. Eventually I discovered that the seating lingered from the Procession of the Holy Blood the day before. The banners still hung above the streets and I regretted not doing a little bit more planning; it wouldn’t have been impossible for me to be there for the festivities. Despite this, I got my cone of fries and was momentarily happy and at peace as I ate them in line for the last canalboat tour of the day.

That’s when the mini-disaster slowly started to hit…the fries made me sick. Vegetarians and vegans take heed: Belgian fries are cooked in animal fat. I should have been prepared. I knew this in advance, and even if I didn’t I had just walked out of the Frites Museum, where this “secret” technique was made very clear. I thought I would be okay. Although I am vegetarian, I’m not extremely strict; I will eat foods made with animal by products, including soup broths. And on top of that, I did survived the fries I ate in Brussels…but then in Bruges, I started gurgling. I’ll spare you all the details.

Before things started to go too downhill, though, I did enjoy an absolutely wonderful canalboat tour. Being able to see a city from the water is truly different than seeing it from the streets and I’m very happy that I made it a priority.

After the tour, I was ready to keep chugging along, still thinking it might be possible to see all of Bruges’ highlights, wake up the next morning, and be Ghent-bound. Then everything was closed: the chocolate stores, the waffle shop recommended to me by a local, the Basiliek van het Heilig Bloed (Basilica of the Holy Blood), Michelangelo’s “Madonna and Child.”

I wandered around until it was late enough to eat dinner and call it a night. I found a vegetarian friendly restaurant with an asparagus risotto, definitely a little out of my budget, but after my unfortunate frites experience, I was looking for a (safe) splurge meal. The chef even came out to see if I was vegetarian or vegan so he could make the food accordingly! About halfway through my meal, I started to feel very sick. I thought I was going to pass out in the restaurant alone, so I grabbed my purse and bolted outside. Everyone probably thought I was trying to dine and dash, but I explained to the waiter that I felt faint. He let me sit outside for a bit, brought me a glass of water, and the chef came to check on me (twice) to make sure I didn’t have anyfood allergies. It was an experience that felt a lot scarier than it needed to because I was alone, but the staff couldn’t have done more to make me feel comfortable and safe. Unfortunately, I cannot find the card with the name of the restaurant, but if/ when I find it, I will update with their name. I highly recommend paying a visit!

I walked back to the hostel, made my bed, took a push button shower, and got locked out of my locker because I set the code differently than I thought I did. In the morning, I decided that I was done with Bruges. I didn’t care that I didn’t see everything. In fact, I wasn’t even going to go to Ghent, I was done with Belgium all together. I needed a clean solo travel slate. I was going to take my time getting ready, hop on a train, and move on. Right after I made that decision, I realized I had approximately eight minutes to strip my bed, get dressed, pack up, and check out. In the mad rush, I forgot both my key and my sheets in the room.

After I checked out, I took my time getting ready to face the day and actually packing my backpack…in the lobby bathroom. I ate some crackers that I had been lugging around and made my plan to head to Rotterdam. Since I was leaving Belgium (in theory), I decided to make a chocolate stop on my way to the train station. Then I went to the locally recommended waffle shop Chez Albert (I preferred Maison Dandoy in Brussels.) Then after the waffle, I realized I was only a block away from the holy blood. My day (and feelings towards Belgium) was getting better. I made one last stop to see Michelangelo’s Madonna; you can see a glimpse without purchasing the ticket and that was enough for me coming off of four months of Italian Renaissance art.

I was ready to head out, having accomplished everything I wanted to in Bruges, but I realized getting on a train without eating was probably a bad idea. I remembered that an American I met in Brussels recommended a brunch place with a good atmosphere; perfect, maybe I’d get lucky and they would have an actual bagel. I was in a little bit of bagel withdrawal at this point, since the one bagel I managed to find in Florence had really just been a bun in disguise.

I couldn’t have been luckier. The place was called Sanseveria Bagelsalon…and they primarily serve bagels. Unfortunately, they were packed, but they happily prepared my “Edward” (pear, radish, goat cheese, cream cheese, and black pepper) to go. I sat along the canal, my feet resting on my backpack, and re-energized. I was going to need it if I was going to go to Ghent that afternoon before making my way to Rotterdam. I was half a day behind, but that was okay.

“Once a journey is designed, equipped, and put in process; a new factor enters and takes over. A trip, a safari, an exploration, is an entity, different from all other journeys. It has personality, temperament, individuality, uniqueness. A journey is a person in itself; no two are alike. And all plans, safeguards, policing, and coercion are fruitless. We find after years of struggle that we do not take a trip; a trip takes us. Tour masters, schedules, reservations, brass-bound and inevitable, dash themselves to wreckage on the personality of the trip. Only when this is recognized can the blown-in-the-glass bum relax and go along with it. Only then do the frustrations fall away…I feel better now, having said this, although only those who have experienced it will understand it.”